Omah-Lay: The new kid spreading faster than the Corona virus. 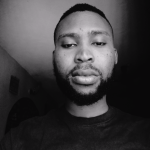 I bumped into Omah-lay’s sound by accident a week ago. Here is how it happened exactly.
It was a calm evening about two weeks ago. The  boredom that came with lockdown was eating away my time. I had to go see my friend who is also an up and coming  artist,  for some productive talk.
I met him at his house, smiling. He was hyperactive , which was unlike him. Apparently,  he was high on sativa and was listening to a really catchy tune that drew my interest. The song suited the mood of the evening, I loved it immediately.
I asked him “Na wizkid new song be this?”  He looked at me, laughed and he said ” na Omah-lay sing am”. I took a mental note of the name, as we enjoyed the alternative pop sound blaring out of his pills. I got home that evening, logged on to twitter to see a follower eulogizing Omah-lay. Here is the tweet

This made me  check him out on audiomack.  That decision has been one of the best decisions I’ve made this month. Even now, when I walk on streets,  I see and hear young people play his songs. Confirming my suspicion that ‘Omah Lay don blow’.
Aside the River State born artist’s talent and sound being super  impressive, what is most striking  about Omah Lay is his promotion strategy. His songs are practically everywhere.

I have been an ardent follower of of Nigerian music and I have never seen anything like it. So,  I researched further to know the secret  behind his commercial success.

Omah lay and his team combined both traditional media and the new media in promoting his songs.
His first single titled ‘you’,  was strategically released on the 14 of February  2020. A day set aside for celebrating love (st valentine’s day). All through the month of February ‘You’ was played on traditional music radio and TV stations. The stations are MTV, Sound city Fm and others This  strategy helped him gain fans and recognition among core consumers of Radio and TV contents.

The second notable strategy was the use of Instagram ads to promote his video. A good number of people got to know him and his songs through those ads.  After listening to his song on MTV and the likes,  and seeing his ads on Instagram.  You’d be forced to check him out on streaming  platforms like apple music, audiomack and others.  This was exactly what happened  as his song skyrocketed to the top of the charts of these streaming website, making more people notice him and his fan base increasing considerably.

Established artists like Simi, Adekunle Gold and DJ Neptune recommended his songs  to their large fan base on Twitter and Instagram. People who hadn’t come in contact with him became even more curious. Given that these Artists are known for having good sense of music, their fans didn’t want to miss out. As they checked out Omah Lay,  they became hooked themselves.

The last strategy is word of mouth or person to person recommendation. Many people got to know Omah Lay through their friends or acquaintances. In view of the recent lock down,  many people were at home vibing to one song or the other.  I, being one of such people discovered Omah Lay during that period.

A good number of very talented artists and their team sleep on the use of social media ads for  song promotion. They think song promotion must involve building networks in ‘Alaba’ and featuring in DJ mixes that nobody listens to anymore, submitting their songs and videos to radio and TV stations and praying to ‘blow’.

It is clearly beyond that as we have seen. Omah Lay fame continues to grow everyday and this is not only because of the power in his music alone. But also, from some strategic marketing and positioning. A lot of up coming and talented arts and their team need to learn and understand this methods.

In conclusion, Omah-lay’s sound and vibes creeps on you like a virus and once it hits your eardrums, it doesn’t leave you the same.  In my own opinion and that of so many others I believe , He is potentially one of the future greats. With kids like Omah-lay running the show,  the future of Nigerian music are  definitely in good hands.

One thought on “Omah-Lay: The new kid spreading faster than the Corona virus.”